With a wide range of monuments and classified as UNESCO World Heritage Site – Templar Castle and Convent of the Knights of Christ – the former headquarters of the Knights Templar stand out for an artistic and cultural wealth.

Templar Castle and Convent of Christ

Convent of Christ is the designation we use for Tomar's Templar Castle, the Templar Rotunda – the knights’ shrine –, the Manueline Church, the Renaissance Convent of the Order of Christ, Mata dos Sete Montes, the Chapel of Our Lady of Conception, and the Aqueduct of Pegoes, which was built in order to take water to the Castle.

The Convent of Christ dates back to the beginning of the Portuguese Kingdom, in the 12th century. It was the time of the Crusades and the Templars were forming new Christian Kingdoms in the Iberian Peninsula. In 1159, The Templars received the Charter of Ceras from King Afonso Henriques – which is a wide territory between Coimbra and Santarem – in appreciation for having taken part in the conquest of Santarem and Lisbon. This is where they founded the town and castle of Tomar.

Located in central Tomar by the statue of the city’s founder, Gualdim Pais, St John Baptist Church was built in the 15th century and rebuilt in the 16th century. In 1520, King Manuel turned the Church into a Collegiate Church. The works are believed to have started during the time when Prince Henry was Master of the Order of Christ.

The Festa dos Tabuleiros (Festival of the Trays) – which takes place every four years – is based around St John Baptist Church.

Although very discreet on the outside, the Synagogue of Tomar is quite impressive on the inside. The only proto-Renaissance Hebrew temple in the country is formed by four columns representing the matriarchs of Israel: Sarah, Rachel, Rebecca, and Leah. There are 12 arches connecting the columns, which symbolise the 12 tribes of Israel.

Prince Henry had this Temple built in appreciation to the Jewish community for funding part of the Discoveries. After the Jews were expelled from Portugal, in 1496, the Synagogue was closed down and used for several purposes: it was initially turned into a prison, then a chapel, hay shed, barn, warehouse for groceries, and storage room.

It was acquired by Samuel Schwarz, in 1921, and bestowed to the Portuguese Government in the condition that a Portuguese and Hebrew Museum would be placed there.

The Convent of St. Francis – which was founded in 1624 by Franciscan friars – is a Mannerist building built around two cloisters.

The Convent of St. Francis houses Museu dos Fosforos (Match Museum). This is one of the greatest collections in Europe, which was bestowed to the City Hall of Tomar by Aquiles da Mota Lima and comprises over 80 thousand objects, among which are match boxes, posters, and labels. 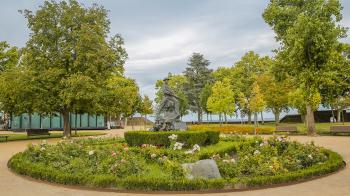 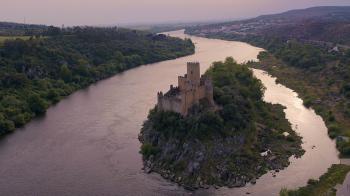 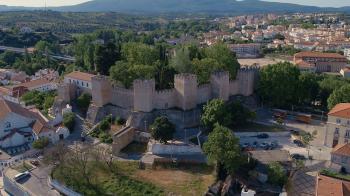